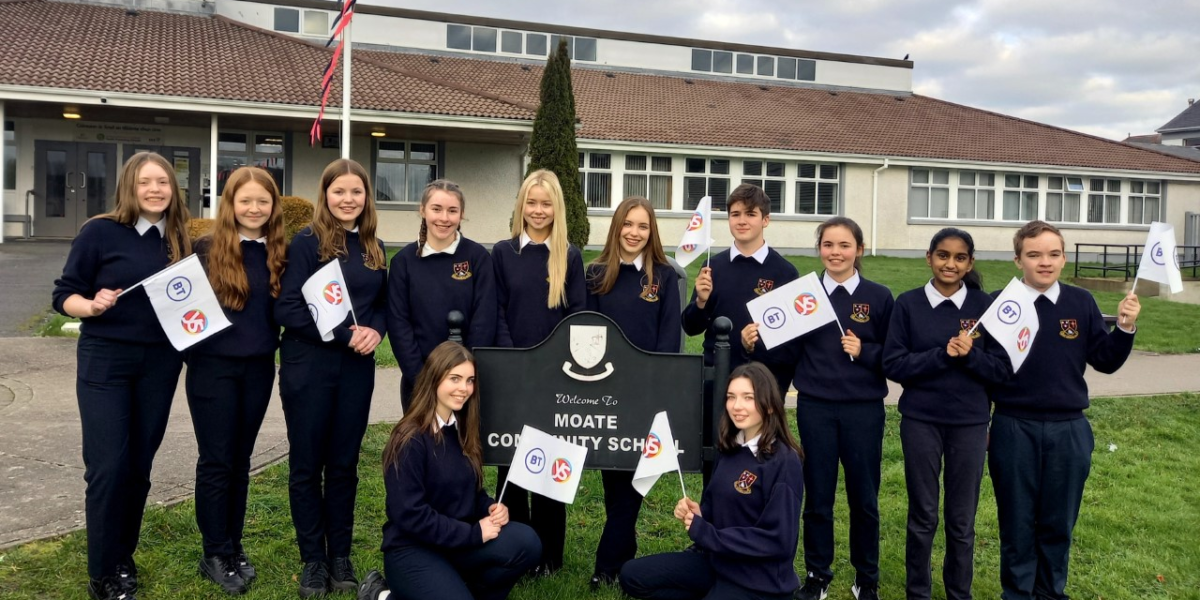 MCS students scooped a total of nine awards at this year’s BT Young Scientist and Technology Exhibition. Once again, the judging and presentation of the projects was virtual, on 12th – 14th January. Having completed their scientific investigation, each group/individual produced a project report, a 3-minute video and a 15-minute presentation for the judges. And then presented to a series of three judges over two days. They were well prepared, including mock interviews online with their teachers. The students were awarded five major Category Awards, three Highly Commended Awards and a Display Award. Congratulations to all the students and their mentoring teachers Ms Mairead Cusack, Ms Irene O’Sullivan and Ms Margaret Mandal.

Second years Fionn Campbell and Emma Keane were awarded First Place in the Junior Technology Category for their project, Coding the Solution to Ireland’s Scam Call Issue. The students designed an app which alerts the user when they receive a fraudulent call and advises them on how to respond. This would help reduce the success rate of these scams and reduce the overall incidence of the issue if the app was used on a large scale.

Second years Diya Govindaraju & Seán Farrelly were awarded Second Place in the Junior Technology Category for their project, Light-Belt: A Life Saving Belt. Diya and Seán also received a Display Award. They created a prototype consisting of an LED light strip which turns on in low light conditions and a vibration buzzer activated by a sensor detecting approaching cars. Their prototype will enable students walk and cycle safely to and from school on Irish roads and is particularly helpful for individuals with a hearing impairment.

Katie Creggy, Aoife Ross & Hannah Higgins with their project Eco-friendly alternative to Chemical Cleaners were awarded Third Place in the Junior Biological and Ecological Category. The students created an eco-friendly cleaner using fermented fruit and vegetable peels. They monitored the pH, alcohol content and sugar content of their fruit and vegetables over a 21-day period.

Jack Nally, Leah Connell and Lucy Hamilton received a Highly Commended Award for their project Nature’s Solution to FootRot. The students created a feeder that administers a foot soak comprised of native Irish plants to supress the spread of foot rot. Foot rot is a highly contagious disease affecting the interdigital tissue of ruminants. They found extracts of thyme and pine needles to be particularly effective in supressing the spread of foot rot.

Eabha Greville, Grace O’Flaherty and Claire O’Donohoe were awarded First Place in the Social & Behavioural Category A Statistical Analysis of the use of Americanisms by Local School Children and Parents

The students investigated if TV shows, books and social media consumed are having a significant impact on everyday language. From their surveys, they found that a significantly higher rate of children than adults use Americanisms. And from statistical analysis, found this result was due to adults getting devices such as phones at an older age than current children.

Alex Roache and Eimear Keenahan in their Firebreaks investigated the potential of native Irish plant species for use as green firebreaks in preventing the spread of wildfires such as those occurred in Killarney National Park last year. They designed a prototype firebreak consisting of a fire-retardant ground cover such as Sedum, fire-retardant wind-break trees, and a protective barrier for existing foliage, along with a flame-resistant layer such as Ivy or Honeysuckle. The students received Third Place in the Intermediate Biological and Ecological Category.

Dara Shortall, Dean Burns & Eoin Murphy received a Highly Commended Award for their project, Developing Modified Buffer Strips to Increase Biodiversity and Water Quality in Grassland. The students investigated the best plants to absorb nutrient run-off from fertiliser before it reaches nearby waterways, planting them in a 2-meter strip along the edge of a waterway in a farmer’s field.

In their project High frequency to save food, Poppy Hennessy and Sive Brady developed a storage device that uses high frequency sounds and endothermic reactions to prevent the growth of bacteria and fungi and therefore preserve food. They also investigated the heat insulation of common recycled materials such as thick carpet, old jumper, cardboard and newspaper for insulation in their storage device. The girls received a Highly Commended Award.

Gráinne Kelly worked as individual in her project Seeing Sweetness and received a Highly Commended Award. Her project aimed to utilise the ways the brain uses various colours to perceive different levels of sugar and their sweetness in taste. The results of her investigations showed that a red sweet is the most detected sweetest and high amounts of colourants are not needed for the sweets to be considered sweet.